Peterson’s Custom Fab Shop has built a lot of innovations through the years but the 2005 Bomb Remediation Scraper is on the short list. The CAT 633 scraper was built as a mechanical clearing machine for Unexploded Ordnances around the U.S. and abroad. It was the brainchild of Terry Northcutt (Timberland Environmental Services) who brought his idea to Peterson engineer Bud Collins to put it into iron. Previously he'd collaborated with Peterson on two armored cabs for CAT 325 excavators used in land-clearing operations in munitions-heavy areas.

The Range Master - affectionately known at Peterson as the Bomb Buster – is outfitted with body armor and telemetry gear for remote-controlled “real time” munitions clearing up to one mile away. It is one of our coolest innovations to date, the Big Boys version of a videogame/remote-control tractor all rolled into one. The operator sits in a chair inside a trailer surrounded by three big screen monitors and a panel full of switches and joysticks. The “Virtual Cab” was fabricated with the help of radio/video vendor A.R.A. and is the ultimate video game. It allows the “operator” to control the scraper from a mile away, through hydraulic slave controls, and five video cameras that transmit visuals so the operator can see where he’s going and how various parts of the machine are functioning. Fail-safe overrides are built into the system in case something goes wrong.

The Range Master was built to clear one acre an hour, for roughly $4100 versus $10,000 to $15,000 per acre for traditional excavation. It was designed to remediate heavily contaminated UXO sites (unexploded ordnance) up to 12 inches below ground and to collect, segregate and transport those munitions to a prepared site for disposal and remediation. The scraper is armored to withstand detonations up to a 105mm projectile.

The Pentagon estimates UXO cleanup at bases closed since the end of the Cold War will cost about $14 billion. In May 2005, another 33 military base closures were added to that list. The Government Accountability Office believes the figure is more likely $100 billion. The Dept of Defense also estimates that roughly 1,400 sites on 10 million acres are littered with UXO. 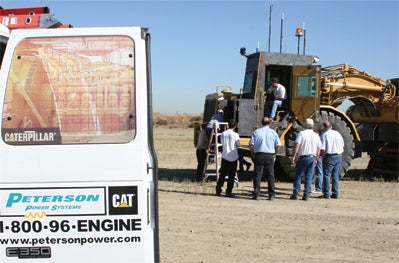 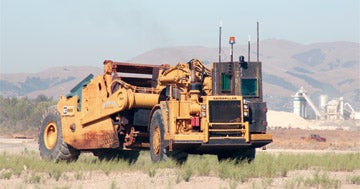 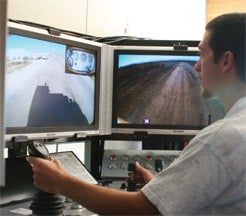