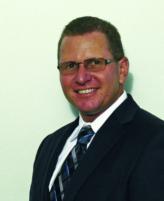 John originally joined the company in 1989 as a journeyman mechanic and subsequently worked his way up through the Peterson hierarchy to his current position today. John has been a key part of Peterson union negotiations for the past ten years, and has made an impact on Caterpillar and Peterson brand offerings as well, including work with Caterpillar on the introduction of their backhoe loader lineup in 1989 and their skid steer loader selection in 1998 as well as the creation of Peterson Trucks in 2011.

John graduated with an associate's degree in diesel technology and a bachelor's degree in business management from University of Phoenix.