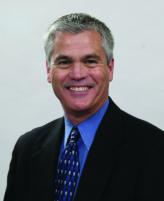 Jeff served for 10 years as Peterson’s Chief Operating Officer, responsible for directing all of Peterson’s operations in the company’s three-state, 100,000+ square mile territory prior to taking on his latest role. Beginning his career with Peterson in 1978, Jeff has worked in a variety of sales and management positions prior to his latest role as President of PTG.

Under Jeff’s direction, Peterson Power Systems became Caterpillar’s top dealer for  emergency temperature control and mobile turbine power systems rental markets and was named the top electrical power generation dealer in 2000 for North America. Jeff was also instrumental in supervising Peterson’s expansion into Oregon and Washington along with its establishment of Peterson Trucks in 2011.

Jeff graduated from UC San Diego with a bachelor’s degree in economics & communications.